Google+
Home » echo park » Can’t make it to Coachella this year? Bootie LA at The Echo has come to the rescue! »
Tweet 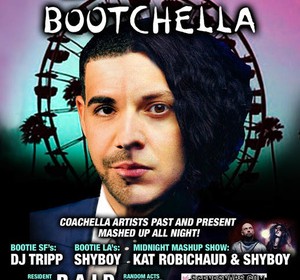 Can’t make it to Coachella this year? Bootie LA at The Echo has come to the rescue!

So Coachella sold out before you could get tickets to the big festival? Then come out for the next best thing: Bootchella! Bootie SF resident DJ Tripp joins Bootie LA’s own ShyBoy in playing music from Coachella artists past and present throughout the night! But there’s one big twist — they’ll all be mashed up! For the Midnight Mashup Show, rock and roll chanteuse Kat Robichaud joins ShyBoy to belt out mashups live, while resident dance crew R.A.I.D. put on their best festival outfits to throw down go-go madness for you all night! Plus SceneSnaps captures it all, and free Bootie mashup CDs for the first 100 people through the door! It might not be the “real” Coachella, but it’s 3000 percent cheaper and you won’t get sunburned!
Launched in 2003 by San Francisco DJ duo A Plus D, Bootie was the first club night dedicated solely to the then-burgeoning artform of the bootleg mashup — and is now the biggest mashup event in the world, with regular parties in several cities on four continents. Voted “Best Club Night” for the past nine years, Bootie celebrates pop culture both past and present, keeping your brain guessing and body dancing with creative song combinations. Mixing and matching every musical genre, era, and style into one big dance party, it’s a place where everyone is welcome. And with free mashup CDs given away like candy, Bootie provides the soundtrack for the A.D.D. generation.

For all Bootie parties worldwide: http://BootieMashup.com 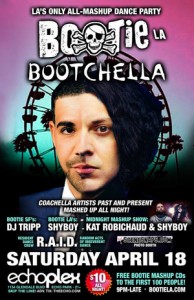