The recent earthquake in Nepal has devastated the region, leaving thousands dead and hundreds of thousand homeless. In the aftermath of this terrible tragedy a world away, many of us wonder how we can make a difference.

So as always, craft beer to the rescue!

Join us on May 9th at participating breweries and beer bars around Los Angeles, Orange, and San Bernardino Counties. Participating locations will have at least one beer on draft as their “donation beer.”

100% of the proceeds will go to GlobalGiving, a highly vetted organization raising funds for both immediate use as well as long term recovery. They have already raised over $2 million!

Can’t make it Saturday or like to make a separate donation? Visit our fundraising page:

Participants so far include: 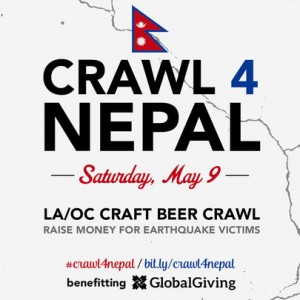