Echo Park Lake is under fire once again after a 40 million dollar renovation, and a two year hiatus, less than a year after it’s reopening. Like many public spaces in Los Angeles, vendors of various goods have begun to set up shop in any location possible. Places with open areas such as public parks are the most susceptible, as it contains no roads, and draws a great deal of foot traffic. Though many residents have expressed support for the lower income vendors trying to make a living, many people who live closer to the park have taken an opposite stance. 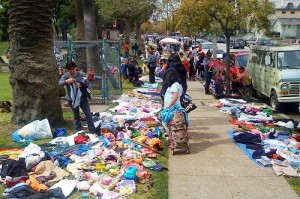 “My fiance and I live right on Park Ave. at Echo Park Lake and this has definitely been a major issue since the lake reopened. We agree that vendors should be allowed to come and make an honest income but over the summer the explosion of vendors has become too much since there is no regulation. It is not uncommon to see 6-8 vendors circling the children’s playground – making it difficult for parents to monitor their children while they play. One vendor even brings two shetland ponies and offers children rides at a cost. The ponies eat the grass and defecate close to areas where food is prepared and children are playing. its disgusting and very unsafe.”

From Pony rides, to un-refrigerated goods being prepared on top of shopping carts, there seems to be no regulations in place. However, many residents, patrons, and families are seeking help from the city, who put so much into fixing the park to keep it regulated. As of late, there was a proposed ordinance in place, but has been rejected. As of late there is no regulation enforcement and the issue is being sent o city council.